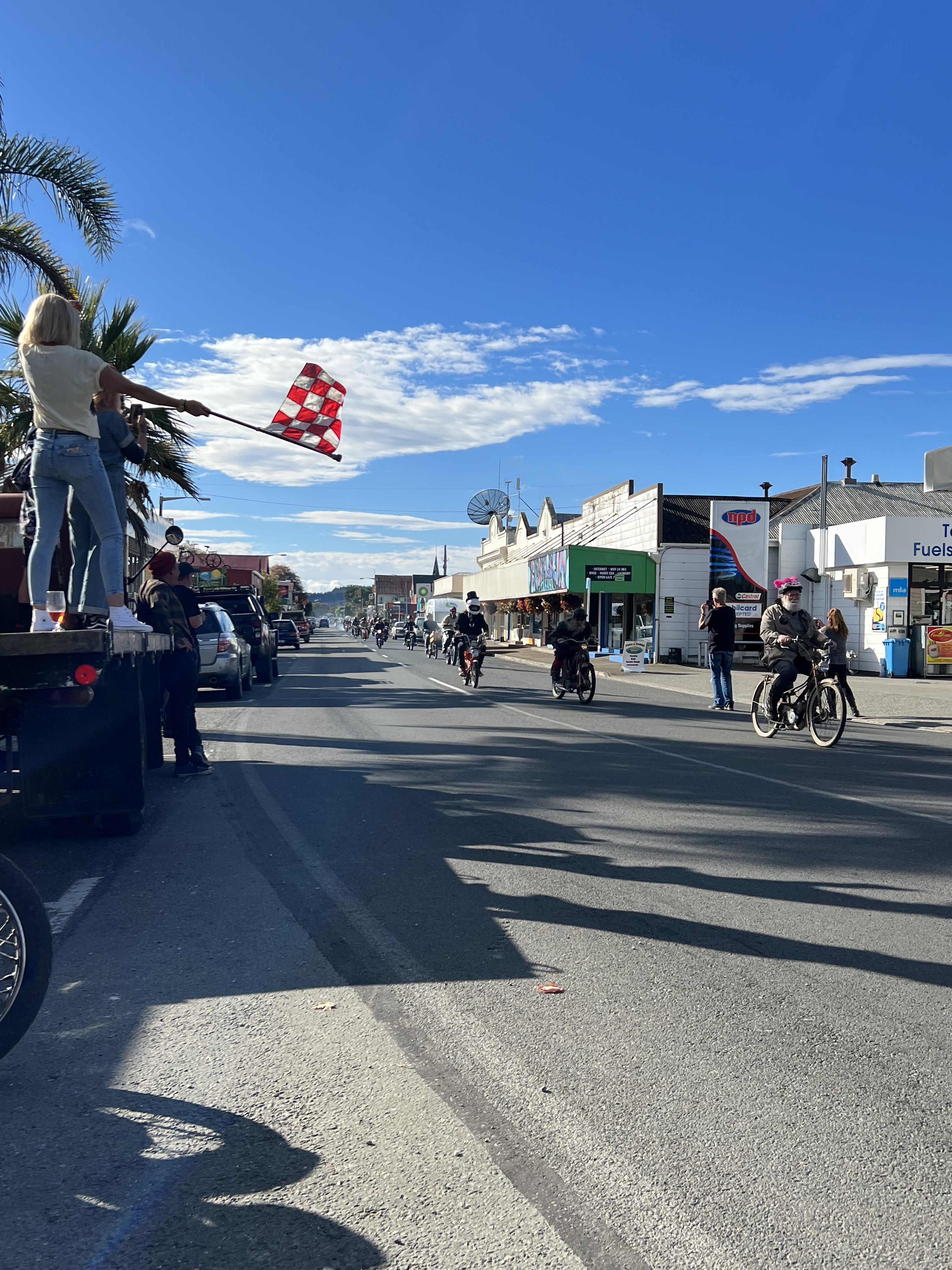 This is something I wrote for Bike Rider Magazine about a recent fun event I organised. “They’re nothing but blue smoke and pedals!” would have been an oft-uttered refrain In the 1950s by riders of ‘proper’ bikes when disparagingly referring to the spindly two-wheeled devices ridden by the less-than-affluent.

The relevance of blue smoke and pedals is that after the Second World War there was a big demand for cheap transport for the masses and this spawned a huge number of small 'clip-on' motors that people could add to their bicycles.  To be light and simple they were almost all two-stroke – which required oil to be added to the petrol to provide lubrication to the bearings in the engine.  The oil was not specially formulated and to resist engine seizure had to be mixed in a generous ratio, usually 20:1.  Consequently all two-strokes of the era smoked when the petrol and oil mixture was sparked and ignited in the combustion chamber.  This, and the fact that some of the offerings were a replacement wheel which incorporated a small engine, led also to the derisive term 'stinkwheel' for the genre.  Later, the cyclemotors and autocycles morphed into ready-to-ride mopeds produced by companies like Velosolex, Mobylette, DKW, Puch, Zundapp, Ducati, BSA, Raleigh, Norman, Philips and others before the influx of small Japanese 'step-through' motorcycles in the 1960s. Originally mopeds had to be able to be pedalled and were very limited in horsepower (usually one to one and a half!) and speed (40 kph) but needed no licence to operate them.

Having a ‘blue smoke and pedals’ ride is not unique but this was an inaugural event for New Zealand’s Golden Bay. The aim was to get as many ‘tiddlers’ out in public as possible and have as much fun as possible.  The eligibility criteria was deliberately noted as ‘generous’ and all things puny were encouraged to turn up.  On Sunday of Anzac weekend they did turn up, not only from around Golden Bay but also from over the Takaka Hill … from Motueka and Nelson. A feature of the day was the easy mingling of rarities like a 1940s American Whizzer with what could be perceived as mundane, like the decades-newer, ubiquitous Honda Cub 50 cc step-throughs.

For the ride, an easy undulating 16 km left-turning route was followed, with two gathering-up points to ensure no one got lost or left behind.  The second rendezvous point was just at the edge of town, so everyone was together for the ‘Main St dash’ – lots of blue smoke, noise, and ear-to-ear grins were on show as more than 30 cyclemotors, mopeds, step-throughs and small scooters breasted the ‘finish line’ to the applause of numerous supporters lined up outside Takaka’s Roots Bar.

The Roots Bar provided an ideal venue for the public and the participants to enjoy the sight of these now-antique tiny battlers from France, Germany, America, the UK and Japan.  Notable among the throng were a Power Pac cyclemotor owned by local auto electrician Steve Prince for 47 years, Trevor Polglase’s similar era and style Victoria bicycle and power unit which still had the original Nelson cycle shop transfer on it, an early 1950s 98cc Corgi and sidecar, and the earlier mentioned side-valve, four-stroke Wizzer.  These rarely (if ever) seen exotica almost made the two Mobylettes, a DKW Hummel, a Velosolex and the rare Honda P50 moped, seem hum-drum. Additional to these older, real ‘stink-wheels’ were numerous slightly more modern Hondas, Suzukis and Yamahas of varying capacities and levels of customisation.  A scattering of scooters were also in attendance, along with one eBike with a bee-smoker puffing away on the back to meld in with the ambiance of the day.

There were prizes for The Most Awesome, the Runner-up Most Awesome, Oldest moped, Best Costume, Oldest Rider and Bike Combo, First Temporary Pause on the Road etc., with product prizes provided by local Takaka businesses.  The impressive trophy and prize for the Most Awesome went to the Corgi and sidecar.  As organisers, Martin Kraal, John James and myself were thrilled with the turn-out, enthusiasm of the attendees and the repetitively-voiced “Loved it, there’ll be more of us next year … I’ve got mates who’ll be into this!” 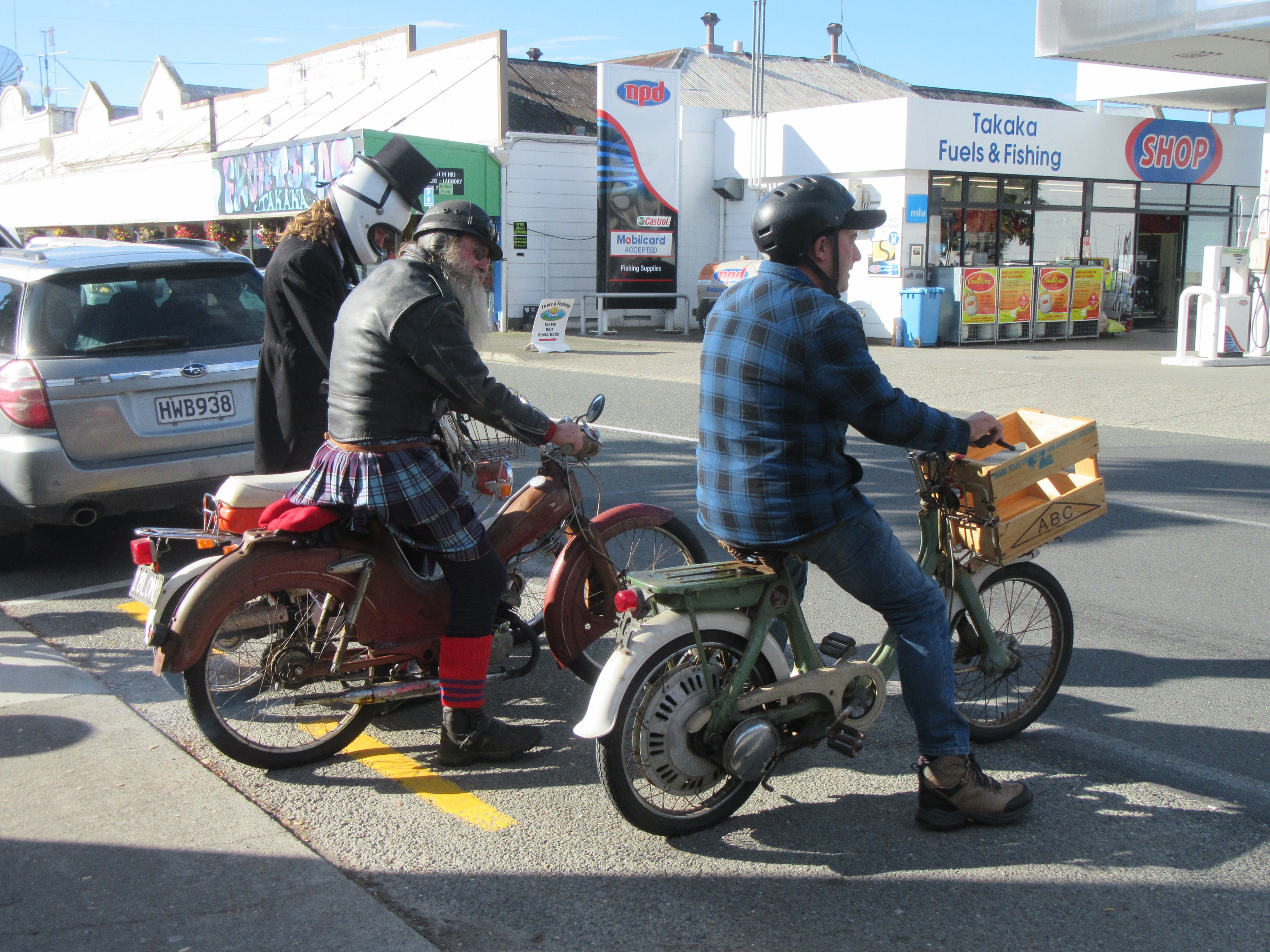 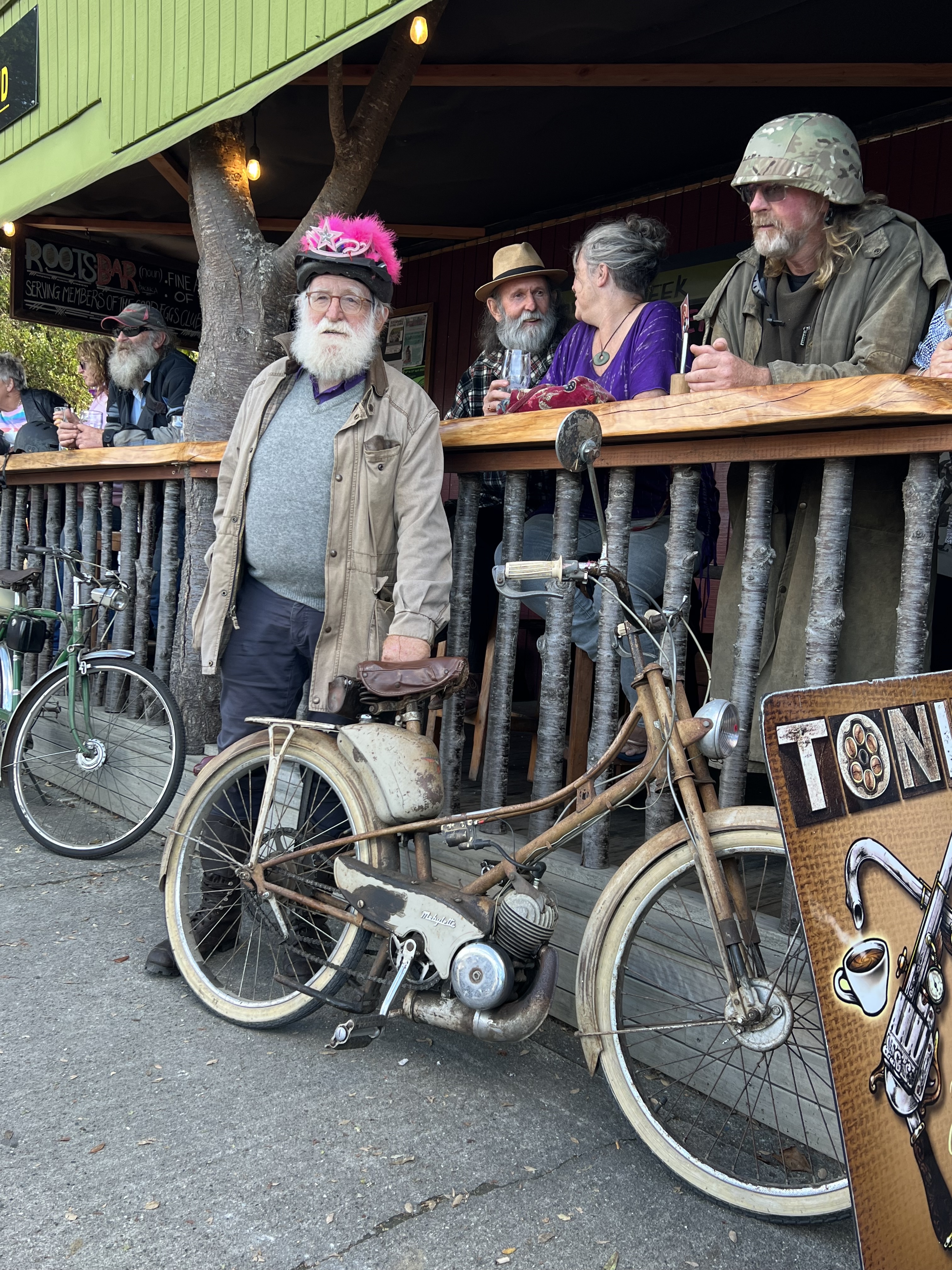 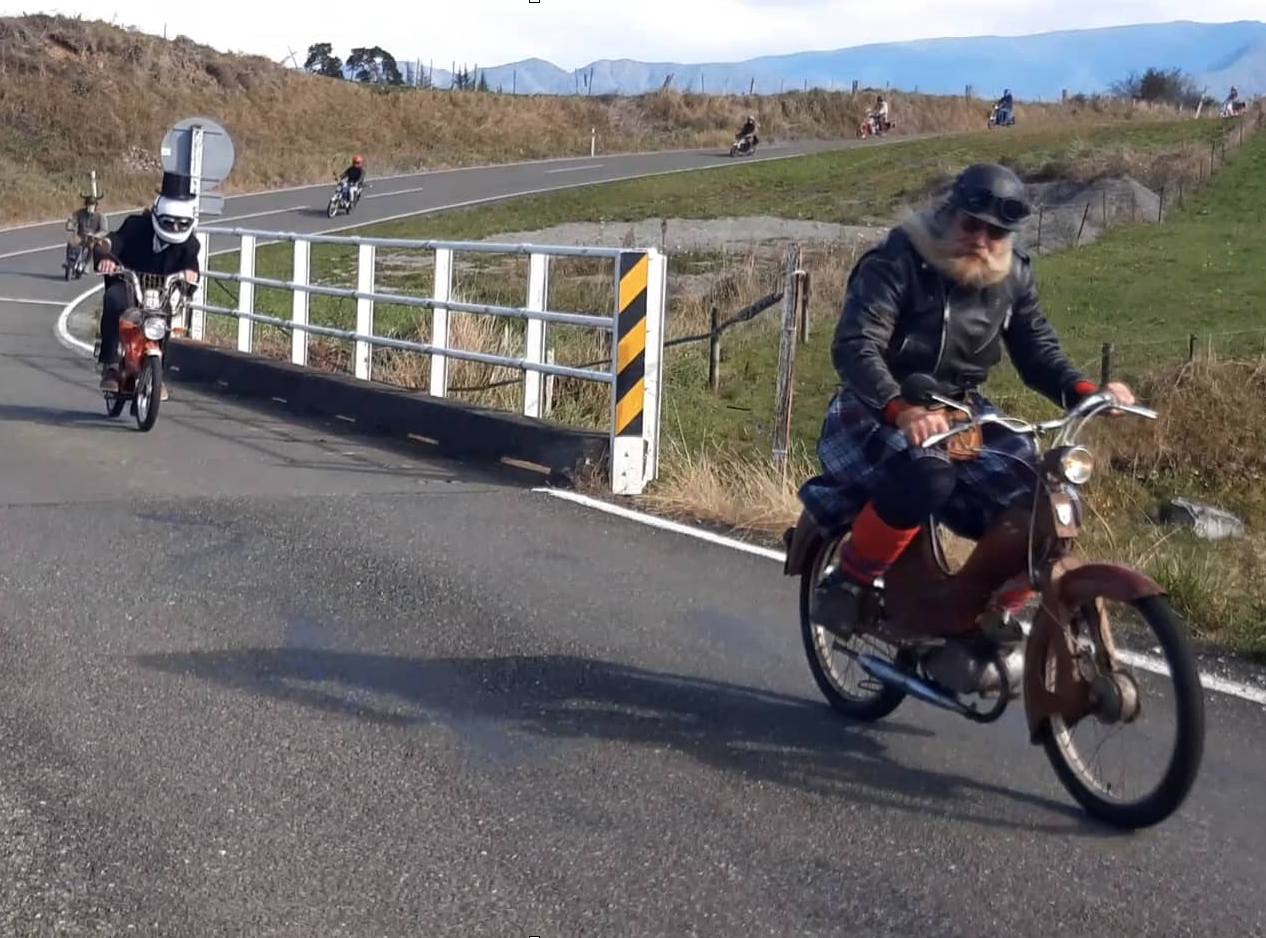 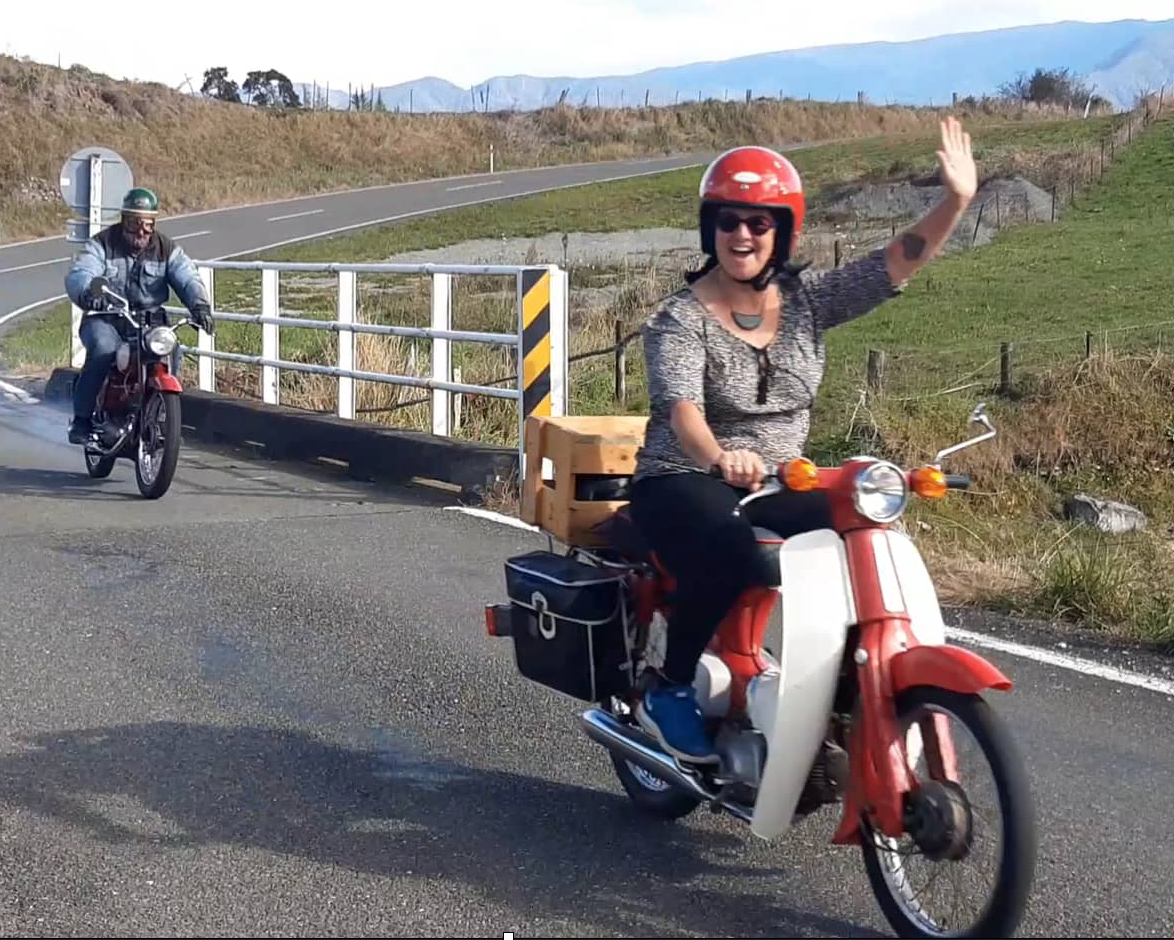 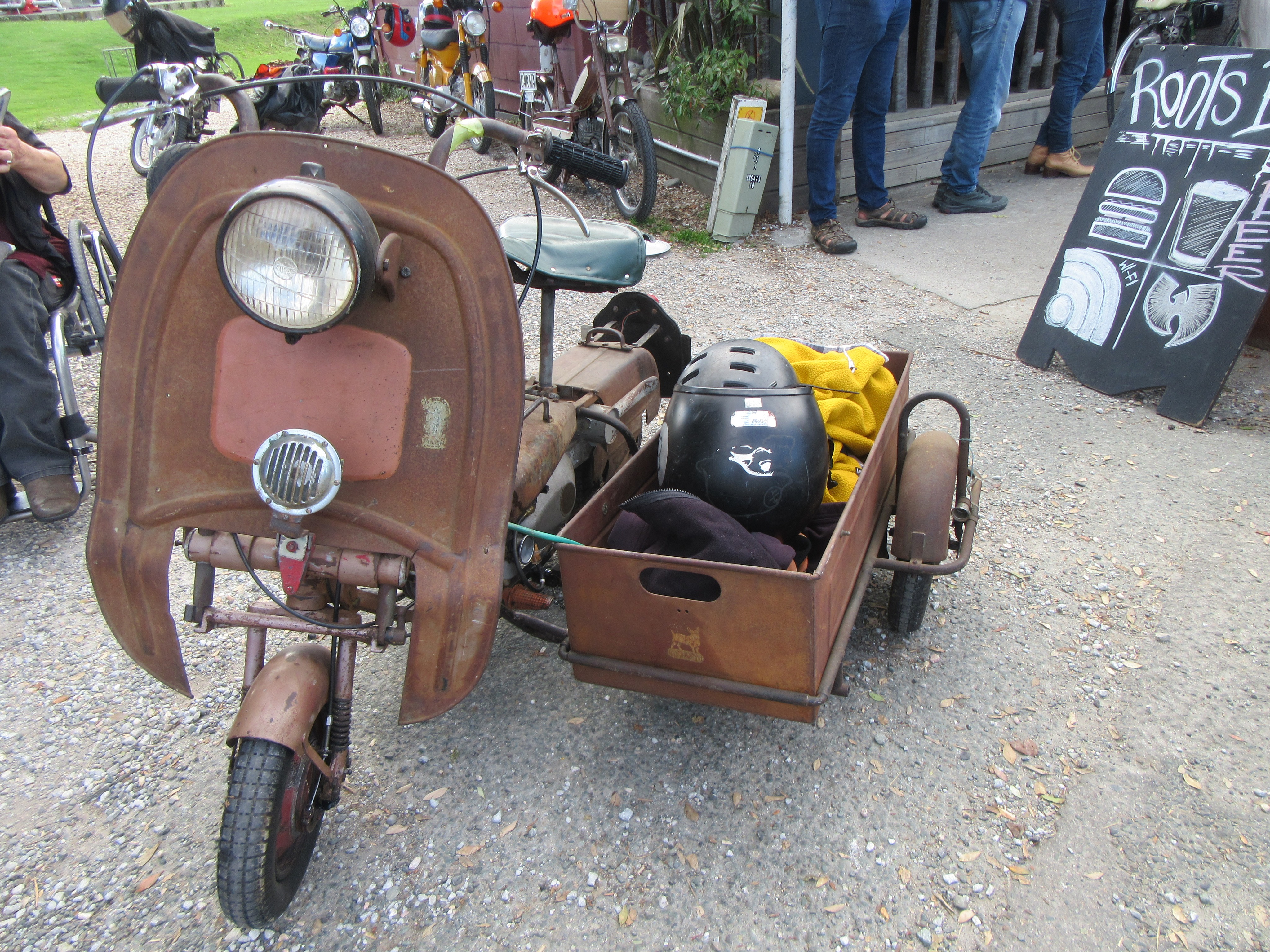 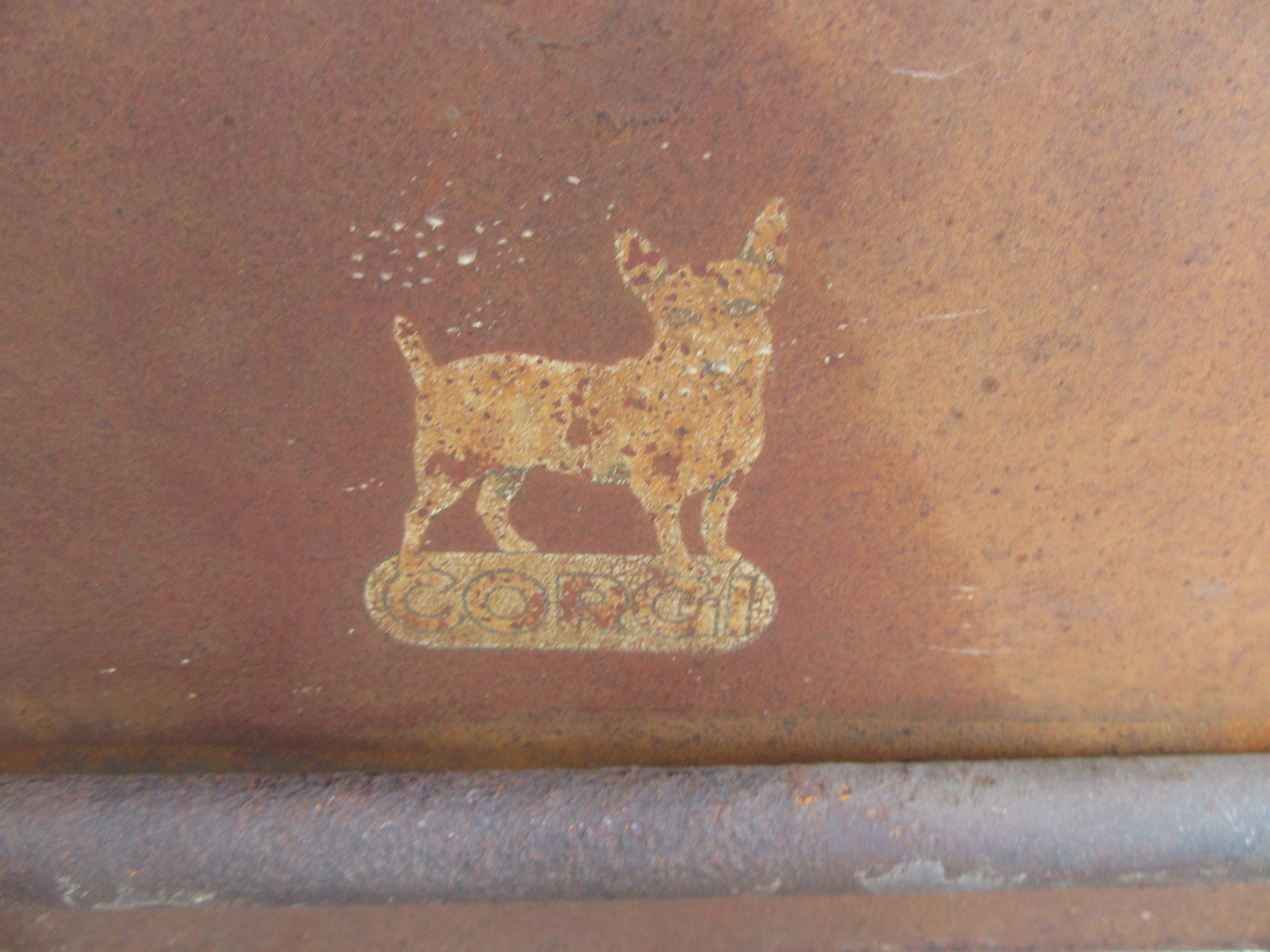 Some lovely patina on the Corgi – photo Karen Kell 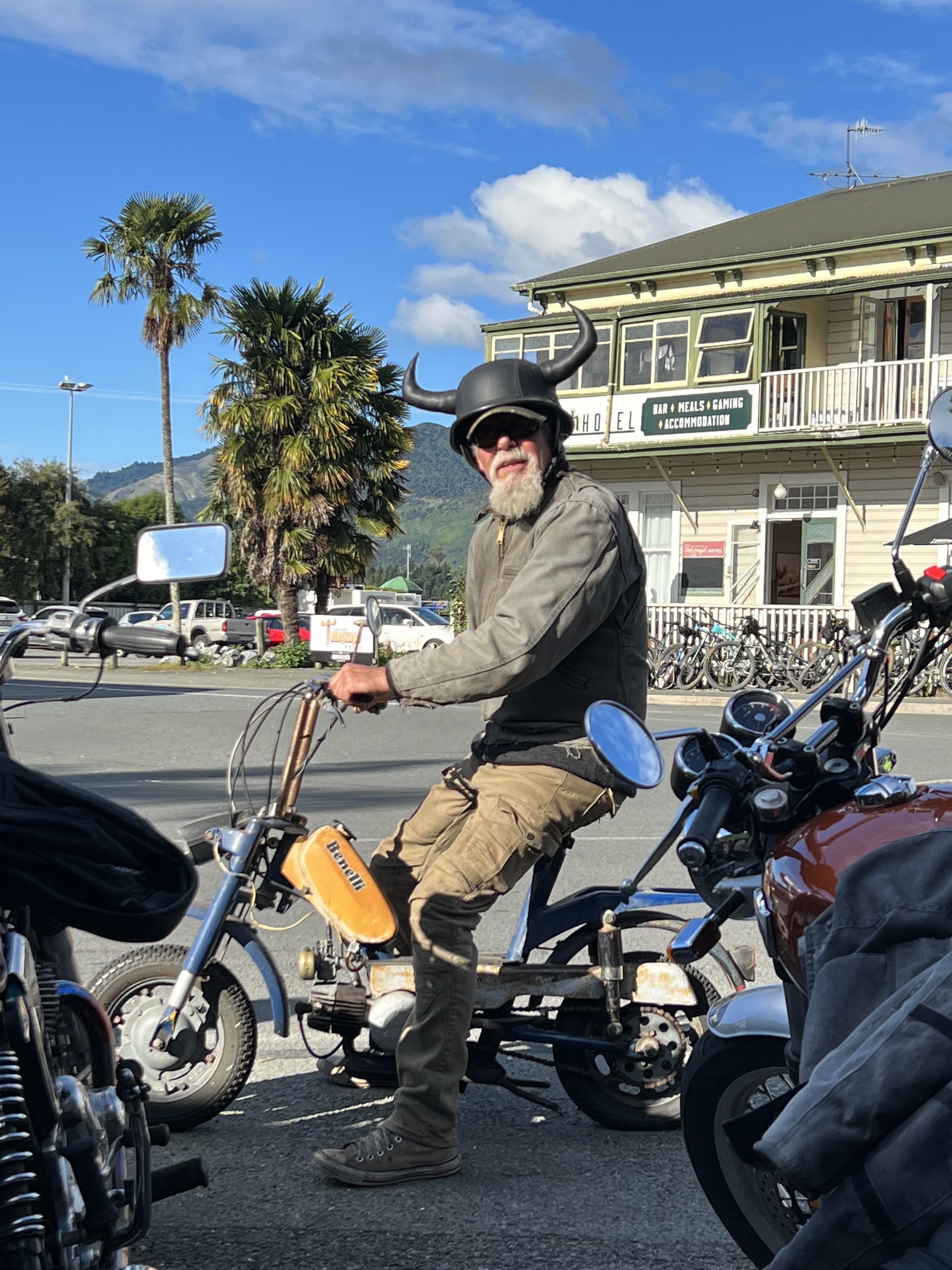 JJ, ready to pillage on his Benelli – photo Ronnie Short 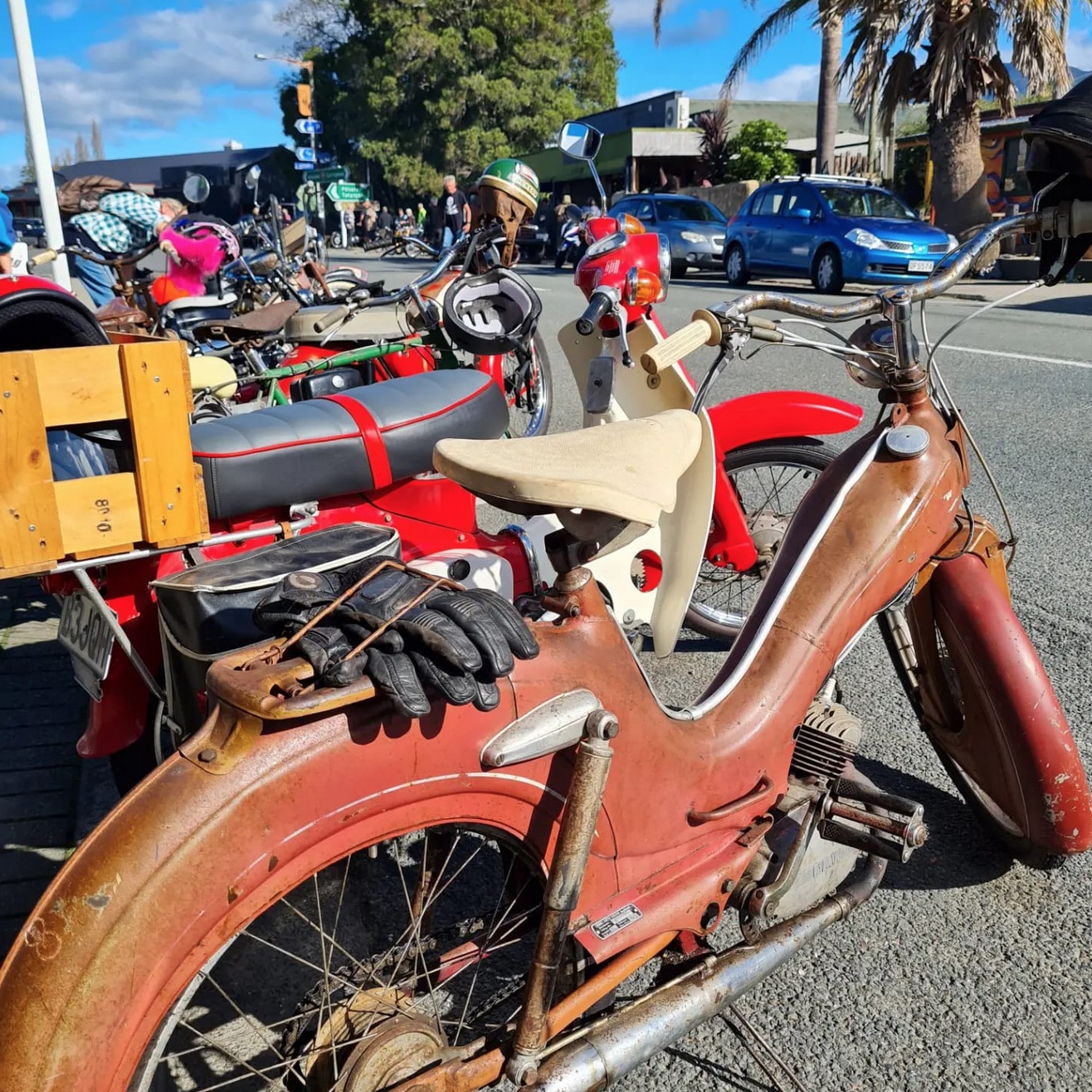 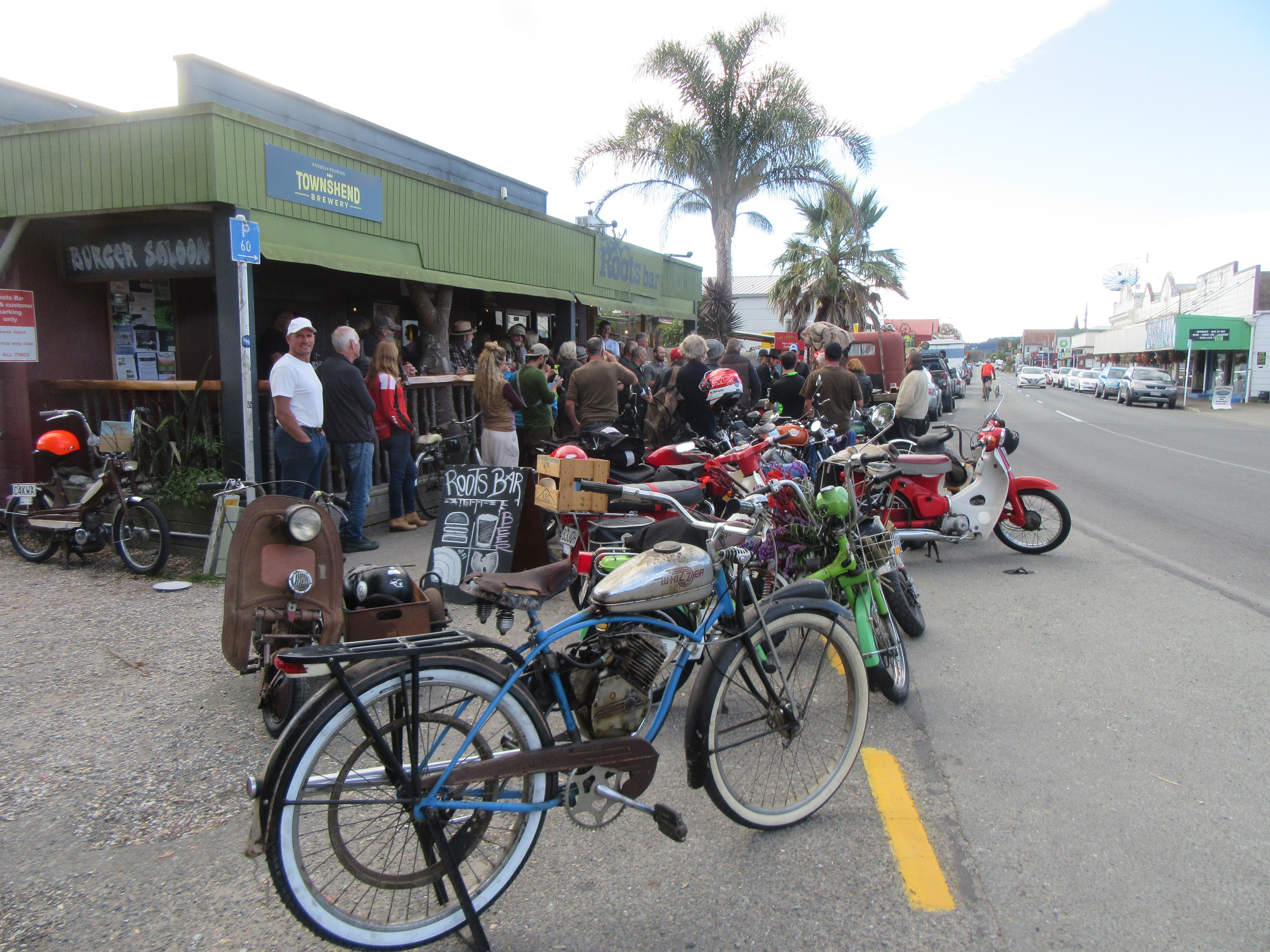 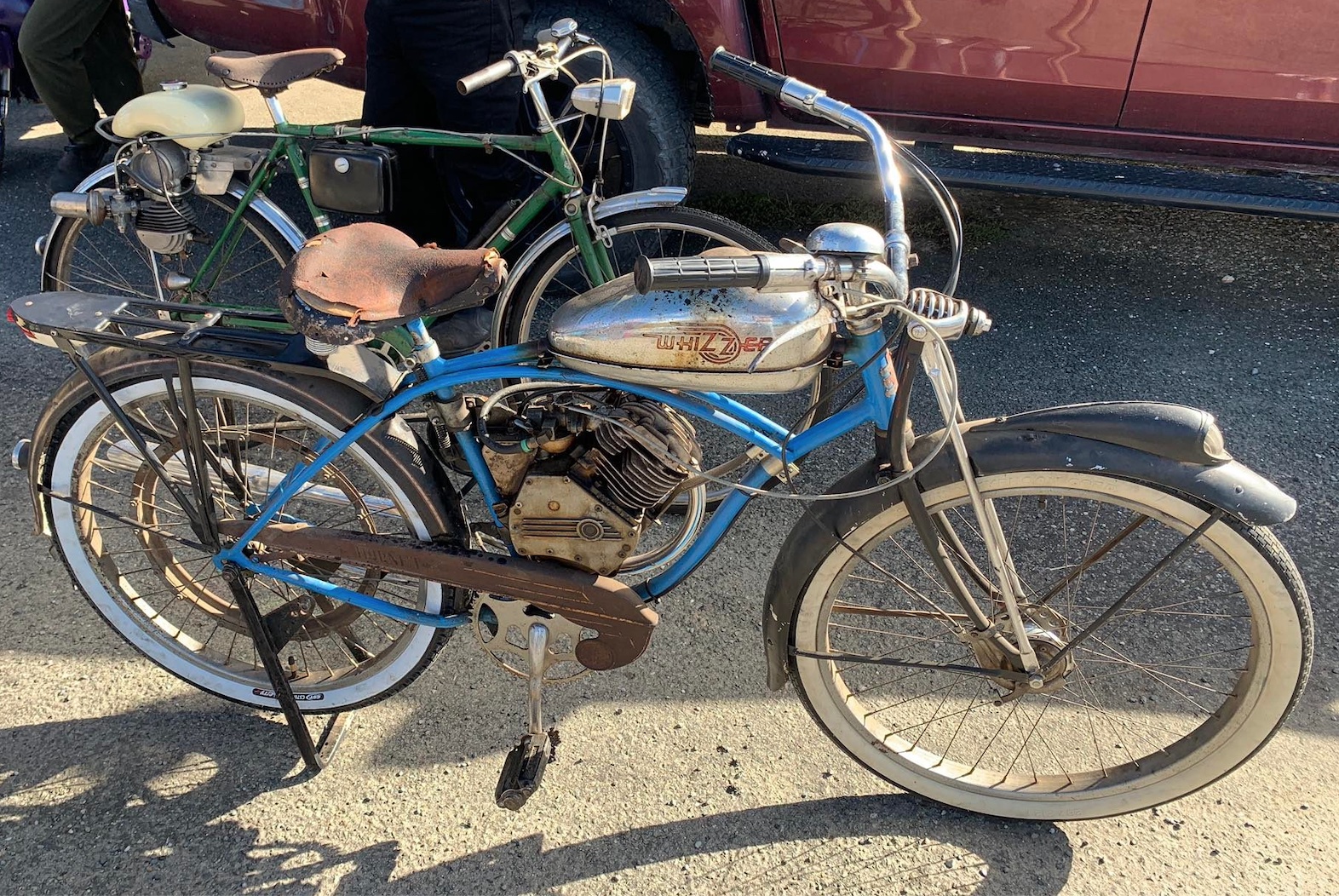 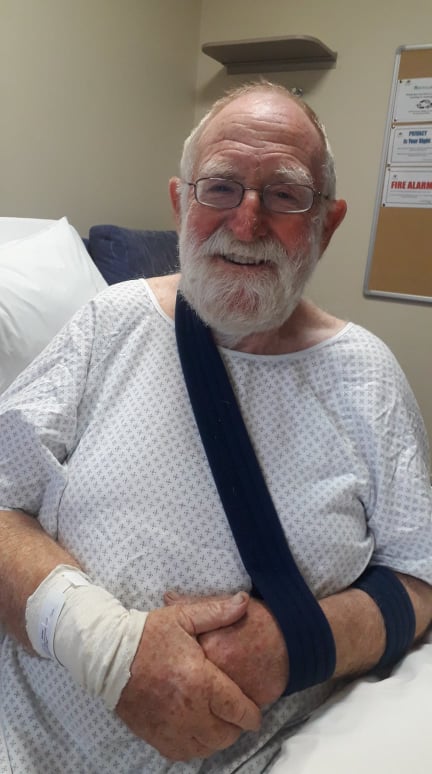