The journey not the arrival matters:

It’s a funny old time. The world is in the grip of a pandemic which has been affecting us all in different and often very personal ways. Some countries have gone brutally hard through having authoritarian regimes demand compliance to restrictive protocols.

Others have tried to balance their economy’s importance and the personal freedoms of their populace against what is known to work. Well how has that gone? China … seen as the bad guy who started this all, has a death rate per million of three. The leaders of the free world with opinionated heads and populations divided through lack of confidence in what they are being told to do, have figures of 623 d/m (UK) and 624 d/m (USA). Sweden who decided to go with ‘Herd Immunity’ has a rate of 583 d/m and an economy doing no better than their neighbours who followed World Health Organisation advice. The pub opinions relating to how well China and New Zealand have done (five d/m), pretty much say China has achieved success through oppression and NZ through luck and being a small island with a small population. Of course, when Ireland is raised as a comparison, being as it has a similar five million population to NZ and is also a small island nation … WTF, it has 366 d/m. What has often been ignored is the success nations with women as their leaders have had. No big egos getting in the way, no bluster or misinformation spouted. Generally the populations have taken on sage advice and followed it. So Germany has had only 20% of the deaths of UK, France, and Spain, Finland has only 11% of Sweden’s.

Thanks to our Prime Minister Adern going early and hard, we now have freedoms that other nations can only dream of … which leads me to last week’s adventure.  The previously postponed launch of George Lockyer’s Tales and Trails Down Under had been rescheduled for Friday night the 25th September in his home lair of Governors Bay.  This meant a 1,200 km spring moto ride.  My anticipatory delight was further heightened by learning that my oldest riding mate Andy Reisch from Waikanae in the North Island had been immediately out of the blocks and booked on the ferry south.  Andy isn’t the oldest of my riding friends by age, but we started together as 15-year-old school mates.  I rode a second-hand Triumph Tigress scooter whilst he had invested in a brand new 120cc Suzuki B100P.  Good times! We’ve both clocked up more than 50 years of riding since without ever hanging up our gloves and helmets.  Naturally our lives diverged and rides together have not been regular in more recent years.  We did however manage to recreate our 1969 full lap of the South Island last year on the correct period Triumphs. Another quality catch-up was overdue. His ferry was two hours late and work commitments in Wellington meant that most of my ride across from Nelson to Picton on the Thursday evening was in the dark.  The bonus of Andy’s delay meant that he hadn’t all that long to wait in the delightful Air BnB (MulberryHouse https://www.booking.com/hotel/nz/mulberry-house-picton) he had booked us before I purred in.  Eve, our host thrust me a welcoming beer.  Another adventure was launched.  There were tales to recall, lies to reinvent.

So Friday saw a beautiful day dawn, a cooked breakfast partaken of and enjoyably the wheels of our three-cylinder motos began to spin.  We’d already decided on a top-up coffee at Kekerengu’s quirky Store where the Kaikoura Coast is met.  A thrilling blast was had through the winding road over Weld Pass with little traffic going our way.  As old friends do, we then sat on a drink in the sun and reminisced.  We recalled Andy arriving at St Annes as a seven-year-old Pom with a foreign name.  In addition to those handicaps, he then had to fight the other 11 boys to see how tough he was, race us all to see how fast he was, and pee against the toilet wall to see if he could threaten Robert Bouzaid’s ability to project a stream of urine over into the Girls. He proved to be pretty tough, fairly fast, and no challenge to Robert Bouzaid.  We’ve been mates ever since.  We talked about past glories, tries scored on the rugby fields, the influences we each had on each other, we talked about family, the old times, the good times, all the part-time jobs we had as youngsters, the close friends we’ve lost touch with, the bikes we’ve had.  We fondly recalled the benign neglect of our parents, enabling an almost-feral but joyous childhood.

Our day’s plan of an extended detour through the inland Kaikoura route went out the window as suddenly it was lunchtime.  The day had been so enjoyable so far that Andy suggested we stay for a meal. The afternoon’s ride that followed was nice but subdued with many stops for roadworks.  Despite Andy’s Triumph Thunderbird appearing to have a large petrol tank, he ran on to reserve near Amberly and I lost him from my mirrors. Knowing he had a GPS … and he is a grown-up … I pressed on as all the interruptions were taking away the day. Andy was booked in at the Governor’s Bay Hotel, the venue of the book launch so that was where I headed … ultimately successfully.

Awaiting me there was Steve Mitchell, a mutual friend of Andy and I, who had ventured overseas with me in 1972.  He’d been out on a Ride Forever course and it was an opportune time to catch up.  Shortly after Andy rolled in and the soon-to-be man-of-the-moment George appeared. A very good and successful night followed.  I said a few words and George responded humbly and appropriately before Clive took over to marshal a question and answer session.  This went superbly … so much better than a ‘reading’.  We have high hopes for Tales and Trails Down Under as it is an interesting and amusing account of a big lap of a big country. George’s interviews from the road are enjoyably varied and his own thoughts inciteful.

All too soon it was time to leave the hospitality of George and Karen, gather up Andy from the pub and head for home.  Saturday was another sunny and mild day, a great one to be alive in, and out on two-wheels.  George showed us out of town on Percy the KLR Kawasaki from TTDU, sharing a late morning coffee with us at the Pukeko Junction café near Amberly.  We’d been a bit tardy getting underway so our timing was out for a morning tea with Steve and Kiki.  At lunch in the historic old Hurunui Hotel we decided to reschedule the day, omitting Hanmer Springs as our overnight stay and replacing it with Springs Junction, the other side of the Lewis Pass.  This would shorten our rides on Sunday enabling Andy to catch the 2.15pm ferry home … the only downside being the need to stop in Springs, known to be a desolate spot with a less-than-wonderful tea rooms and no pub.

The ride across the North Canterbury plains into the snow-clad Southern Alps was de rigueur wonderful with me wondering if there will come a time when technology will enable photos to be captured by blinking.  Many times I thought of stopping to get a photo, but it always seemed to be too hard and the enjoyment of the ride didn’t warrant stopping. As we entered the hills I did something I rarely do.  The weather was threatening and a few spits of rain appeared on my visor.  Usually the optimist in me looks at the sky and thinks “we can beat those clouds”. This time in deference to having a riding buddy along, I stopped and we donned some wet-weather gear.  This precaution kept the rain away and it was a reasonably dry run through the pass.  We weren’t rushing, which was fairly wise as we encountered five police cars, one beautifully positioned under a large beech tree, almost invisible until too late.

The tea rooms in Springs Junction hadn’t improved and my pie and chips would only rate as ‘average’.  The stormy weather we’d been promised would catch us up, did so in the night.  The hour’s ride through the Shenandoah to Murchison for breakfast next morning was done so in some of the heaviest rain either of us could remember riding in. The strong winds had brought down a lot of debris from overhanging trees, so we rode in quite a heightened state of concentration.  Surface flooding of the road was another hazard.  Our repast in Rivers Café was to signal our parting of ways.  30 minutes out of town Andy would peel off at Kawatiri Junction to head up through St Anaud and Top House, and down the long Wairau Valley to Blenheim and Picton.

Slowly the tempestuous nature of the day abated and by the time I was on the Takaka Hill the roads were dry.  By two o’clock I was in the welcoming arms of my beloved and the BMW K75S’s stainless steel exhaust was gently cooling with the obligatory creaks and quiet crackles. We’d done well.  We’d had a rigorous ride, caught up with old and treasured friends … and participated in a book launch.

Shortly after, a text from Andy ‘pinged’ in.  He’d made the ferry on time.  Another adventure was locked away in the memory banks. 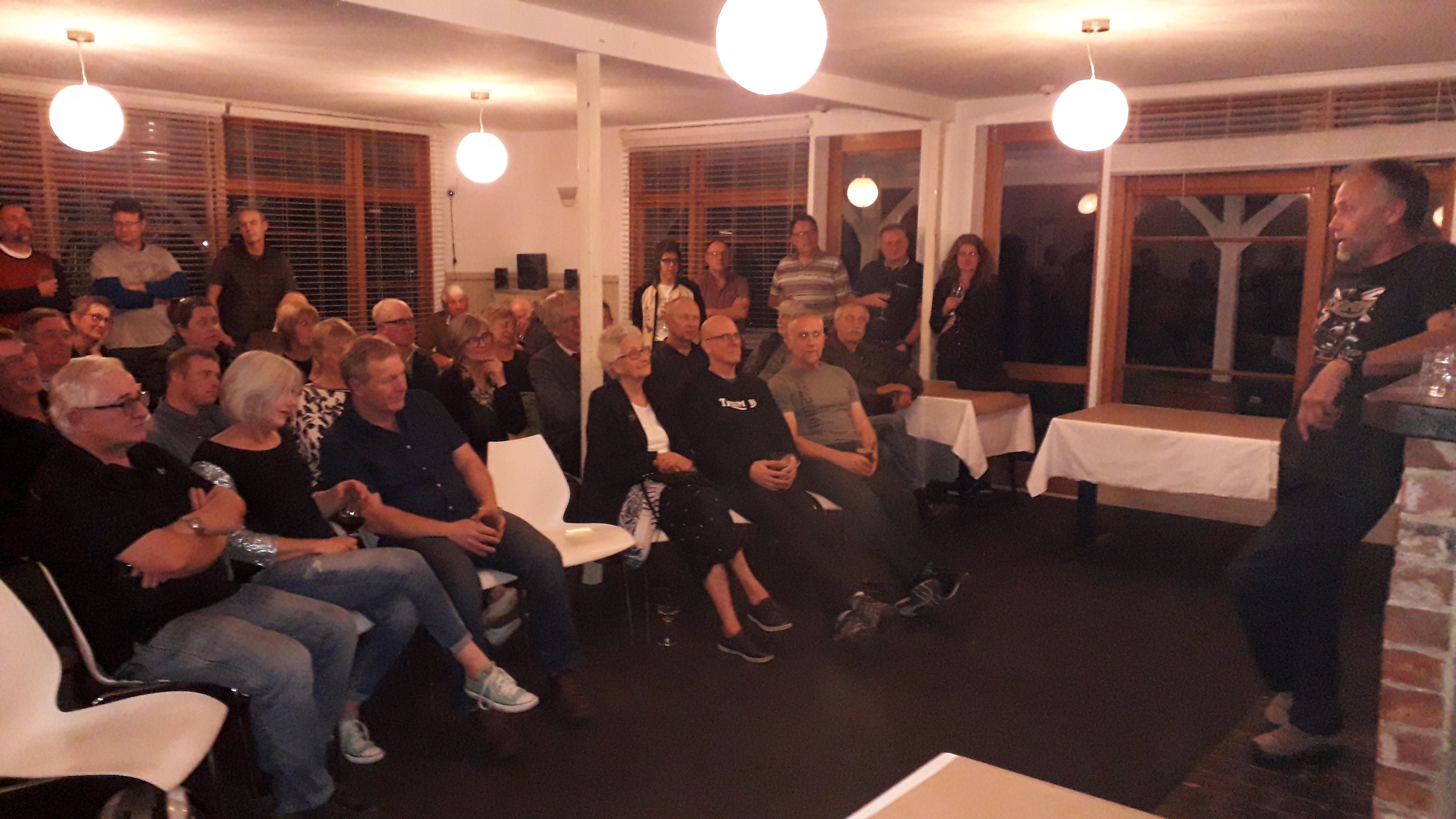 The man himself with a part of the crowd 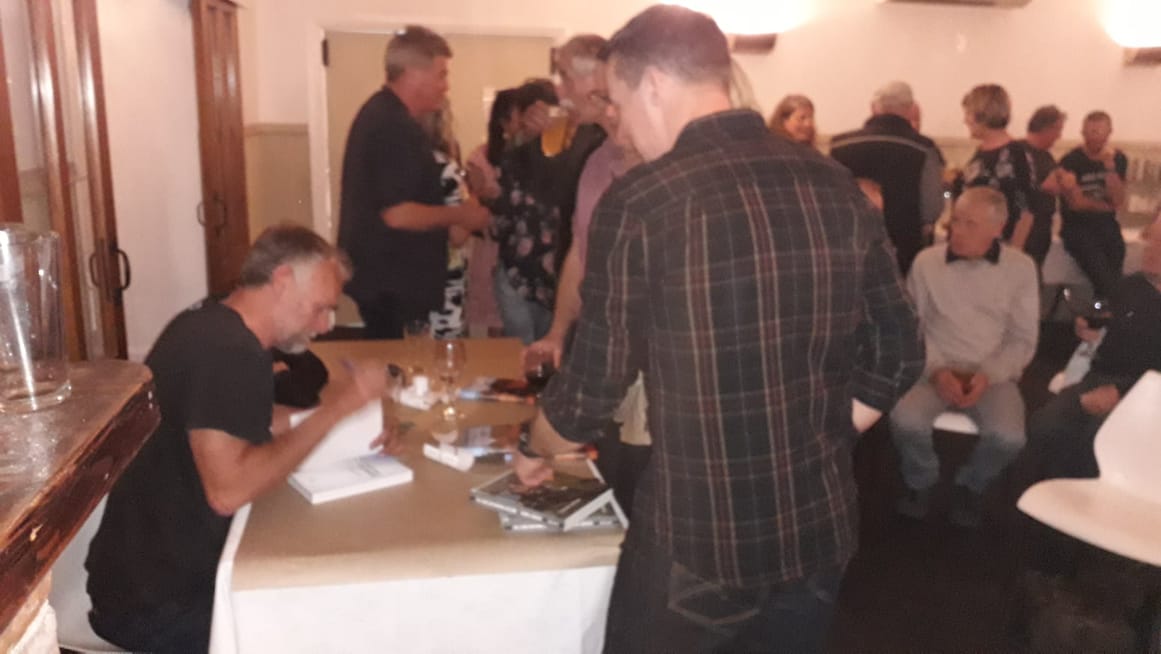 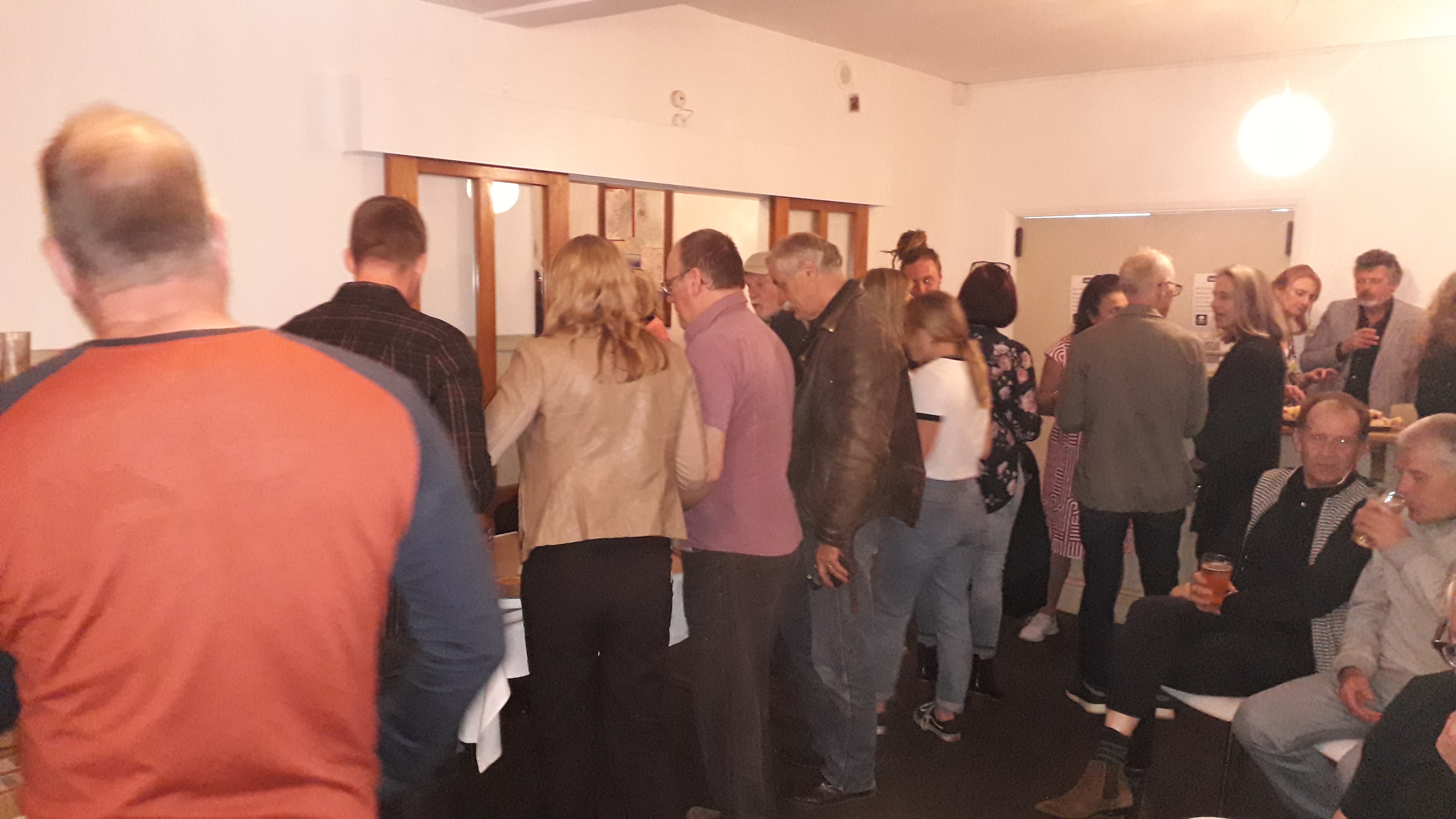 Somewhere in there George is still signing away 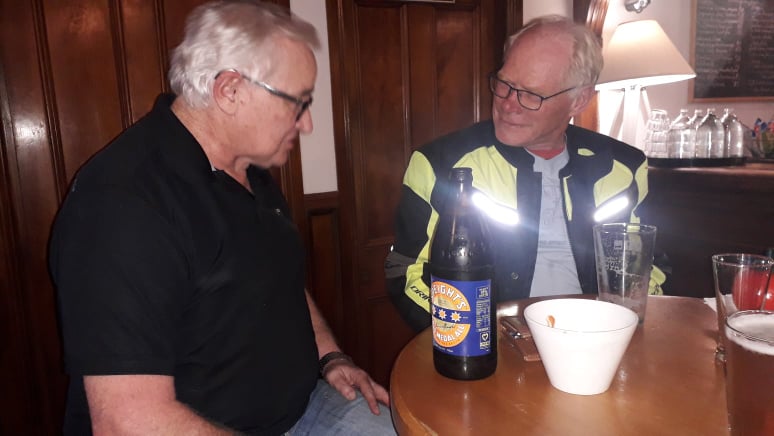 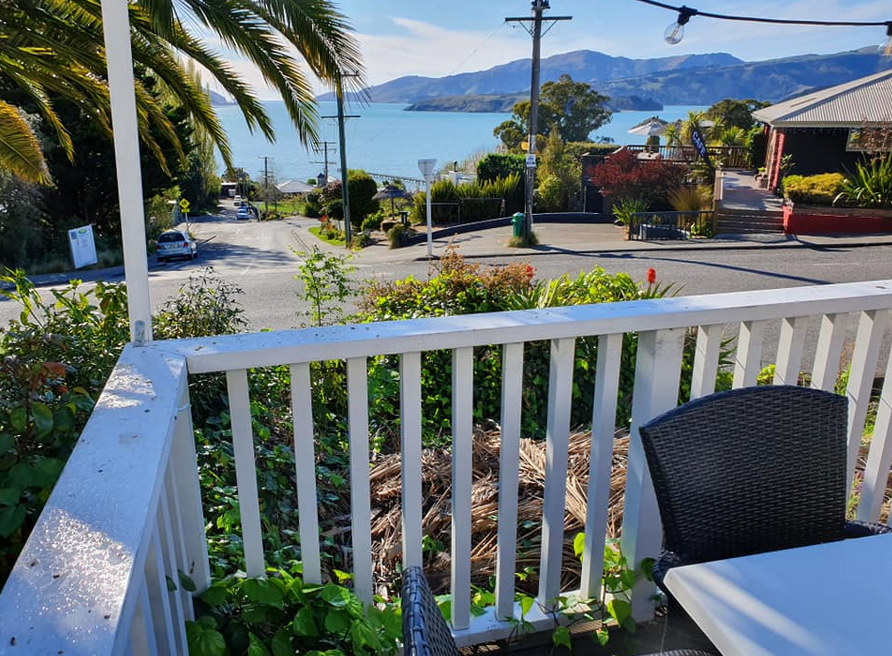 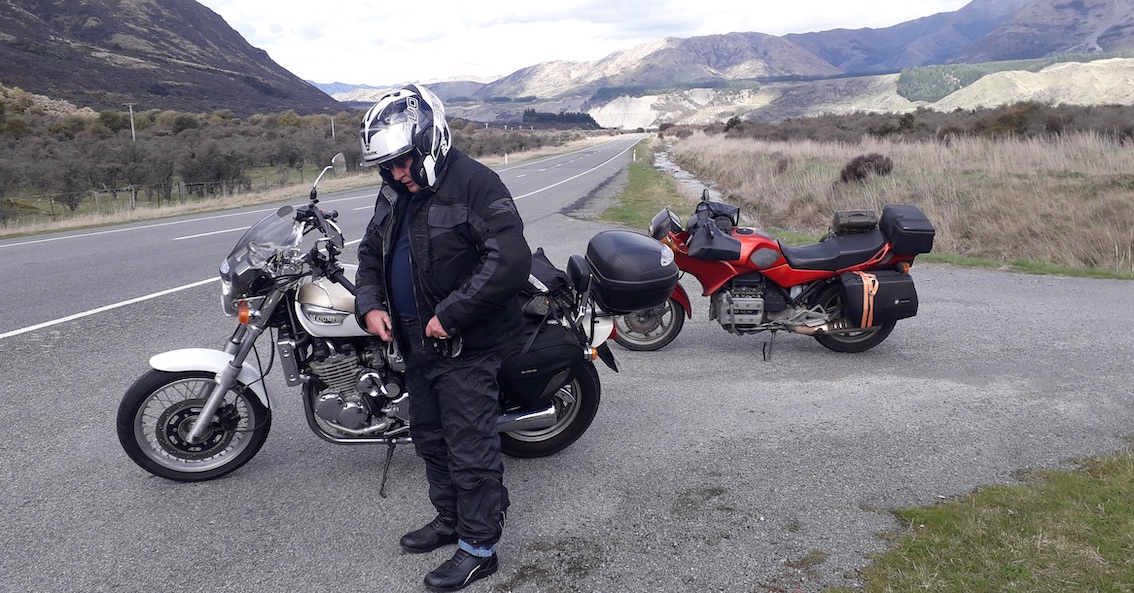 Getting into our wet weather gear was a bit of a cop-out ... and it worked. 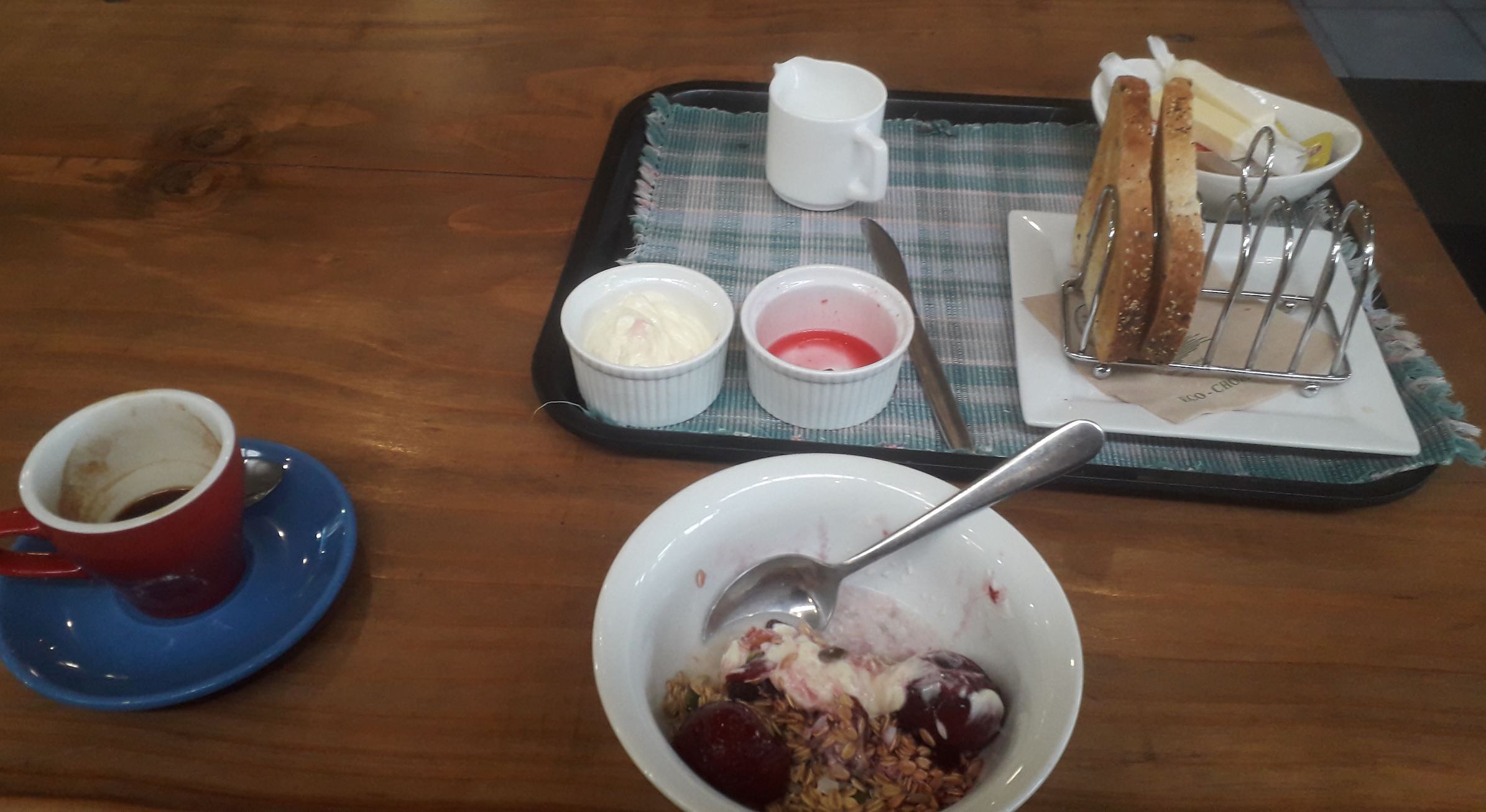 A nice healthy breakfast in Murchison ... something that would probably not be possible in Springs Junction 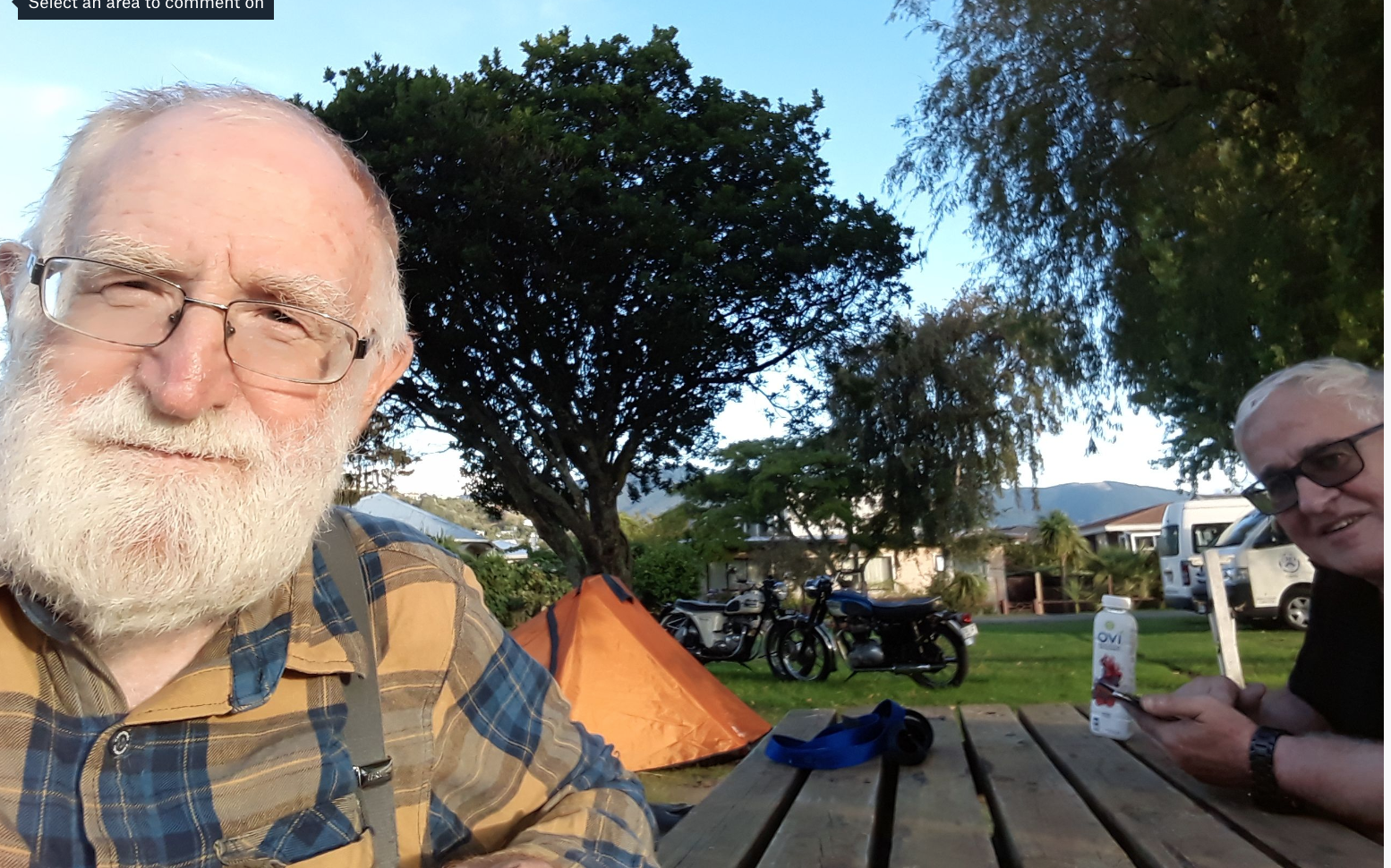 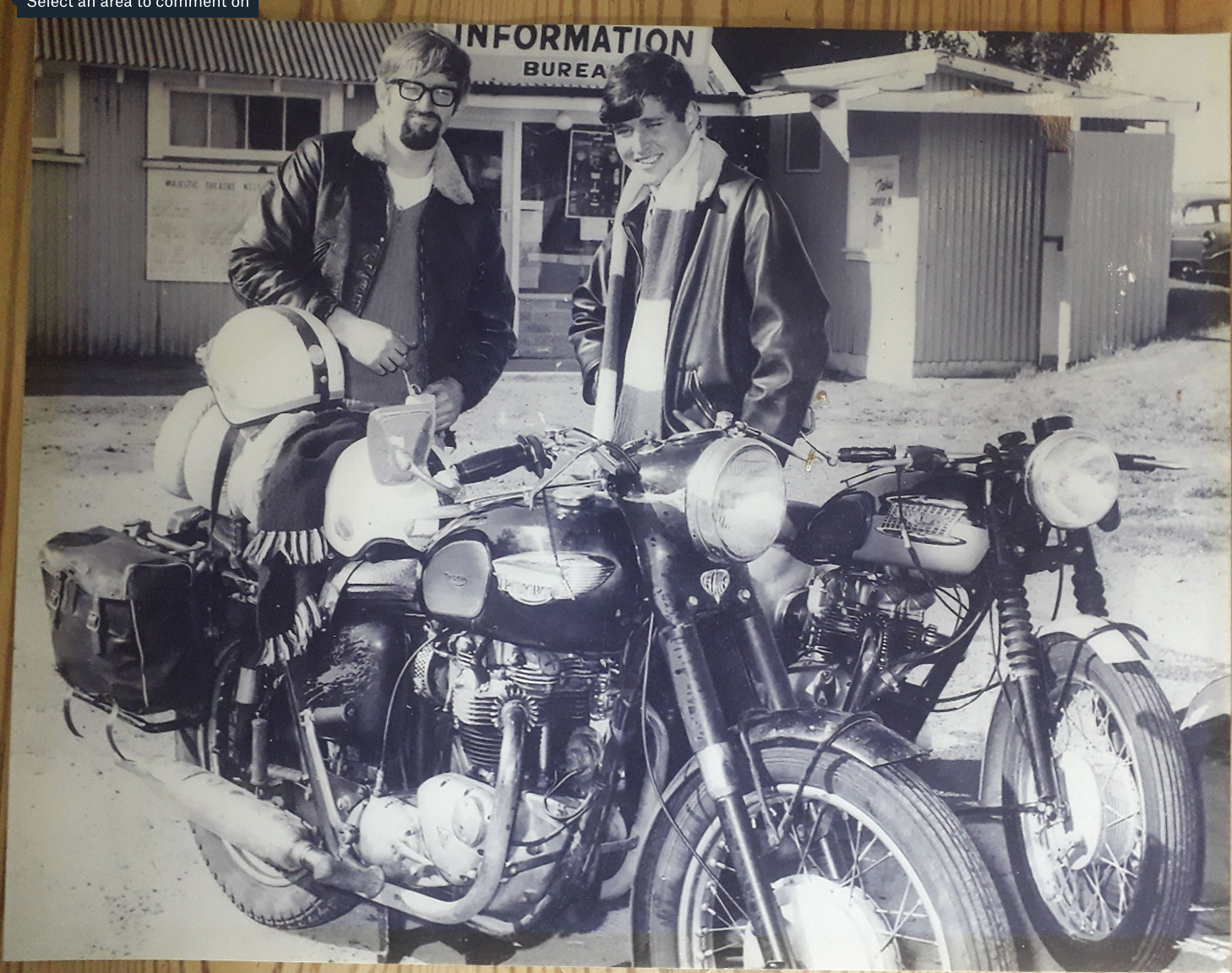